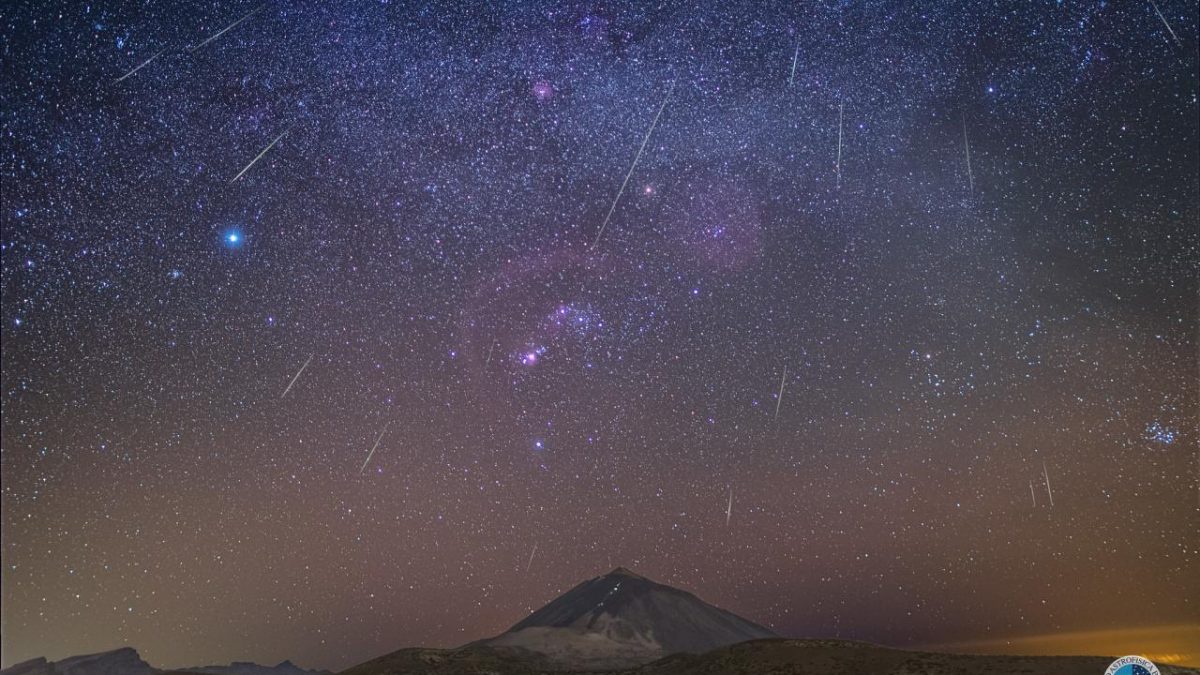 On the nights of 13th and 14th December we will be able to enjoy the maximum of the Geminids meteor shower. The event will be broadcast live from the Teide Observatory (Tenerife), via the sky-live TV channel, on the night of December 14th, with the collaboration of the European project EELabs.

The Geminids, along with the Perseids, are the biggest meteor showers of the year. Reliable and punctual, the Geminids never fail. The activity during the last ten years has always reached over 100 meteors per hour (ZHR “Zenith hourly rate”) putting it in the top rank of the annual meteor showers.

Each year, The Geminids reach the peak of their activity in mid-December. For 2019 the Geminids’ activity will be seen between 4th and 17th December. The maximum is expected at 19:00 Universal Time on December 14th. The nights of 13th to 14th and 14th to 15th December will be the best times to observe the meteor shower.

In what direction should we look? The meteors appear to be coming from a point, the radiant, in the constellation of Gemini (hence the Geminids), which is near the well known constellation of Orion. This year the full moon will make the observation harder, and we will only be able to see the brightest of the Geminids. It is most practical to fix one’s view on one area of the sky and keep it there for at least a few minutes in order to detect a Geminid or two. It may be best to lie on the ground, suitably protected. And above all you need to be patient.

A shower with a mystery

So called “shooting star” are really tiny dust particles of different sizes ( between fractions of millimetres and centimetres in diameter) which are left behind by comets, (or occasionally asteroids) during their orbits round the sun, due to the evaporation produced by the Sun’s heat. The resulting cloud of particles (termed meteoroids) are dispersed along the orbit of the comet, and is crossed each year by the Earth in its orbit round the Sun. During this encounter the meteoroids are heated by friction when they enter the Earth’s atmosphere at high velocity. They evaporate completely or partially, giving rise to the well know brilliant trails or “shooting stars”, which are scientifically termed meteors. Those meteors which survive the atmospheric friction impact on the surface of the Earth and are then called meteorites.

Normally the originators of these meteor showers are comets, but in the case of the Geminids, not so. A small asteroid (32009 Faeton, is the supposed originator of the Geminids, an idea postulated in 1983, which is still a puzzle for the astronomers. The team led by Dave Jewitt (UCLA), using NASA’s STEREO space probe, our eyes on the Sun to “hunt” asteroids and comets as they approached it, realised in 2010 that Faeton was showing a growth in its brightness. This was something new, which they called a “rocky comet”. Is it a hybrid between an asteroid and a comet? To summarize, this is a curious asteroid which gets so close to the Sun, every 1.4 years, similar to the approach of a comet, that the Sun’s heat “burns off” the residual layers of dust which cover its rocky surface, which forms a “dusty tail”. Javier Licandro (IAC) an expert in the small bodies of the Solar System comments that “(3200) Faeton, with a diameter of 4 to 5 km, is a complete destroyer”. If it collided with the Earth it would produce a global catastrophe which would wipe out species, including probably our own. Even so Faeton is a minor risk in the list of potentially dangerous bodies of this type. Even so we need to monitor it, because the orbits of these small asteroids which pass close to the Earth are subject to many effects which could, at some future date, move their orbits and give rise to a collision.

This meteor shower, one of the most attractive for many researchers was first observed in 1862.

“Since 2012 we have been following the Geminids carefully from the Teide Observatory, and they have always given us a major spectacle. This year the presence of the full Moon will make it hard to see the fainter meteors. Our recommendation is to observe during the early hours of the night when the Moon is still not far above the horizon. The Geminids, as opposed to the Perseids, are slow meteors and so it is easier to “catch” them.  In spite of the cold is always worth trying to observe the Geminids” comments Miquel Serra-Ricaft (IAC).

Live from the Teide Observatory

Within the outreach initiatives of the European project EELabs (eelabs.eu),  the sky-live.tv channel with broadcast live the meteor shower from the Teide Observatory  (IAC, Tenerife, Canary Islands).

EELabs  (eelabs.eu)  is a project funded by the program INTERREG V-A MAC 2014-2020, co-financed by FEDER (European Fund for Regional Development) of the European Union, under contract MAC2/4.6d/238. 5 centres in Maraconesia (IAC, ITER, UPGC, SPEA-Azores, SPEA-Madeira) work in EELabs. The objective of EELabs is to create Laboratories to measure the energy efficiency of the artificial night-time lighting in natural protected areas of Maraconesia (the Canaries, Maderia, and Azores).